Adefuye, Nigerian Ambassador to US, is dead

August 28, 2015
Foremost diplomat and Nigerian Ambassador to the United States of America, Prof. Adebowale Ibidapo Adefuye is dead. He died on Thursday after suffering a seizure while being driven by his chauffeur in Washington D.C., the U.S. capital.
Sources said before he could get to the hospital, he gave up the ghost. 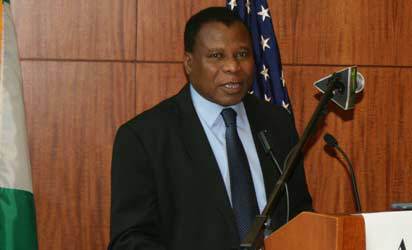 Prof. Adefuye
Last month, Adefuye, among several other Nigerian envoys, had been recalled by the Ministry of Foreign Affairs. He was expected to handover to the Consular General this month, pending the appointment of a new ambassador.
One of his last major assignments was to receive President Muhammadu Buhari and his delegation during the president’s three-day official visit to the U.S. last month.
Embassy officials, who confirmed his demise, said a send off reception was planned for him next Wednesday, but this will now be turned to a memorial service.
A former professor of History, Prof. Adefuye has been Nigeria’s ambassador to the U.S since March 2010.
Born in Ijebu-Igbo, Ogun State, 1947, Adefuye received his first degree in History at the University of Ibadan, Nigeria in 1969, and in 1973 earned a Ph.D. in History there, with a dissertation on “The Political History of the Palwo, 1400-1911.”
As a Fulbright scholar he studied at Columbia University, the University of North Florida and the University of Florida in Gainesville.
Adefuye started his academic career as a lecturer at the University of Lagos, where he rose to the position of professor, published books and articles, and served as Head of the History Department from 1985 to 1987.
Among the books he has written are “History of the Peoples of Lagos State” (1987) and “Culture and Foreign Policy: The Nigerian Example” (1993).
He received his first diplomatic posting as High Commissioner to Jamaica, with concurrent accreditation to Haiti and Belize, a job he kept from 1987 to 1991.
From 1991 to 1994, he served as Deputy High Commissioner at the Nigerian Embassy in London, U.K., from where he was hired by the Commonwealth (formerly the British Commonwealth of Nations) as Deputy Director of Strategic Planning.
After fourteen years with the Commonwealth, Adefuye took a job with the Economic Community of West African States (ECOWAS), where he served as an Advisor for two years, from 2008 to 2010.
As U.S. ambassador, Adefuye helped to persuade the U.S. to remove Nigeria from its “country of interest” terrorism watch list. Nigeria was placed on the list following the December 25, 2009 failed attempt by Umar Farouk Abdulmutallab to blow up a Northwest Airlines flight headed from Amsterdam to Detroit.
Describing relations between Nigeria and the U.S., Adefuye once told the New African, “Historically, we’ve had a love-hate relationship with the United States. We are of strategic importance to America; that no one can deny. They want us to be a bastion of democracy, a peaceful nation. If we’re not, they get very angry.”