Bola Tinubu attacks critics on Fashola...Says I am very proud of my successor

August 27, 2015
Former Lagos State Governor, Asiwaju Bola Ahmed Tinubu has condemned attacks on his successor, Mr. Babatunde Fashola.
Tinubu, in a statement by his media office on Wednesday, said Fashola would emerge victorious at the end.
He said the immediate past governor contributed immensely to the development of Lagos adding that he remains proud of Fashola and would never be part of any process to bring him down.
The statement reads: “The past elections were an epic confrontation between two opposing political camps. Those who believed in the progressive governance of the people gathered under the banner of the APC. Those who harkened to the conservative elitism that had cast this nation downward for so many years held to the PDP. 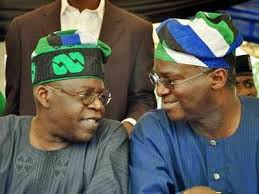 “The elections clearly showed the preference of the average Nigerian. They chose the APC and rejected the PDP nationally and in Lagos state. Since the commanding victory of the APC in Lagos and all over Nigeria, the enemies of progressive governance have cleverly been at work, trying to regain through intrigue and subterfuge what they so openly and fairly lost in the elections.
“Our political opponents now try to steal victory when their only entitlement is resounding defeat.
” Having fared woefully with the electorate, their game plan is to sow discord within the ranks of the party people had chosen to lead them. The PDP hopes to strike division in the APC, in that way weakening us and our ability to govern.
“Apprised of their wiles, we in the progressive camp must be wiser still. We must not allow ourselves to be pawns in this cynical strategy. We cannot fall into their obvious snares for that would be embracing defeat when victory has already been won. It is our responsibility to govern as the people want. It would be to our detriment to fall victim to our opponent’s sly instigations by allowing ourselves to be utensils picking each other apart.
“This brings me to recent developments in the Lagos political scene. Born of this motley stew is the recent gossip mongering that I have willfully instigated false and negative reports against former Governor Fashola to thwart him from being appointed to a major post in the Buhari administration. I want to declare clearly and categorically that these rancid attacks do not come from me nor do I endorse them. Neither my hand nor my heart is in these mean submissions. I deplore them. An attack against the performance of Governor Fashola is indirectly an attack against me and the edifice of achievements we have constructed in leading Lagos State out of a protracted time of stagnation and into an era of sustained progress and development.
“Lagos is a much better place than when we came into governance in 1999. Each year, it has gotten better. With the APC at the helm, each subsequent year will be better yet. Babatunde Fashola has been an integral part of this improvement. He does not deserve the pillory. His record has been applauded and will continue to be when all this rumor mongering has died its natural and quick death.
“I am proud to say that I played an instrumental role in bringing Governor Fashola into politics in the first instance. He served as my trusted chief of staff, performing excellently in that role. Due to his leadership qualities and diligent work ethic, I endorsed him for governor notwithstanding the stiff and vocal opposition of many. I am not ashamed of backing him. I believe the progress the state made under his administration has more than vindicated my endorsement.
“Fashola, the present Governor Akin Ambode including myself are the products of a progressive political institution and its programmatic expressions. I laid the governance foundation and started the first lap, running as well as I could. I handed the baton to Fashola, knowing he would do the same. He did; he ran as well as he could. Now, he has handed to Ambode who is off and running as well as he can. We have achieved much in Lagos; but, we recognise as much as anyone that we have much more to do. 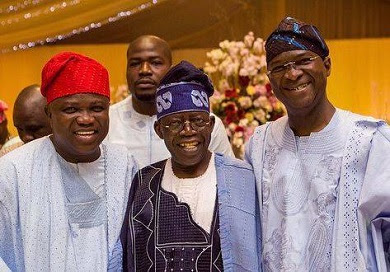 “We also know that progress is fragile and easily undone while destruction is easily transacted but hard to undo. I for one am not the type to tear down my own house or to bring my enemy’s rubbish into it.
“We must remember something. We have always governed Lagos state as an open forum where democracy and free expression were respected. Those who are against us were never placed in fear of the heavy hand of government descending on them even as they played funny tricks. We also must remember than in any democracy, a number of people will always oppose you no matter the quality of your performance. If an office holder has an approval rating of 70 per cent, this means, in Lagos, roughly five million people dislike the person. Also remember the PDP is just recently out of office at the federal level and that it built a vast, unprecedented financial war chest to contest the elections. The residual of that war chest is still at work, buying media space to plant rumors in hopes of spreading discord through the APC. Thus, the enemy camp may be a minority but it is a large and well-funded one that knows its only chance lies in us attacking ourselves.
“I for one will not bend to the artificial provocation of those seeking to tear at what we have painstakingly built over the years. In my mind, Governor Fashola and I are and shall always be political allies and fellow travelers on a vital journey; that alliance is unshakeable and our journey must not be interrupted. I would no more attack his character or his administration than I would attack myself.
“I see this present moment as crucial to Nigeria’s future. The nation faces acute challenges of security, corruption and economic development. Our task is to create policies that bring prosperity, dignity and hope to all. Great change is in reach because we have progressive governments at the federal and state levels for the first time. With great change at hand, it would be a terrible abdication of our duty to allow agents provocateur to prompt us to suspect and toss dirt at each other at a time when we should be focused on building a better, more equitable nation and society.
“I for one shall never allow myself to be a tool of a political enemy that has nothing good in mind for Nigeria. I for one will never engage in the intramural character attacks of which I am being accused. I stand for the unity of the APC and for the progressive purpose we serve. I will not be guilty of tearing down our progressive house, not a brick of it. That I vow to all"