September 28, 2015
As the celebrations for this year's, the Nation's Vice President, Yemi Osinbajo has identified politics in matters of religion and tribe as a major problem facing the Nation at the moment. 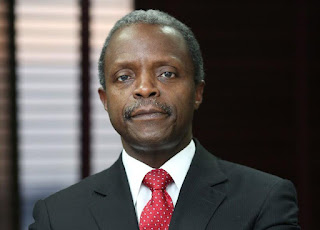 Speaking at the National Ecumenical Center Abuja where the Thanksgiving service to commemorate the 55th Independence of Nigeria held yesterday, Osinbajo said Nigerians must dissociate themselves with from such tribal and religious lines as the issues that affect the country affects all irrespective of tribe or religion.

"Our nation is sharply divided for long along religious and tribal lines. The moment we are divided against ourselves we can’t stand. We must also speak on the unity of the country. It will make a difference in the future of this country.

When a bomb goes off in Potiskum or Maiduguri, it doesn’t ask questions, whether you are a Yoruba, Igbo or Hausa. The issues that we see go beyond the contest between Christians and Muslims. We have seen children and adults blown to pieces who are victims of insurgency.

There were Christians, Muslims and those who do not profess any faith. Jesus Christ did not come to this world to celebrate religion, but for redemption. He came to make sacrifice for us.

The message of Jesus Christ transcends religion. No matter what it is that we face, the answer lies in the love of Jesus Christ. That is what we see as Nigeria clocks 55. We also express our condolences to the families of those who lost their lives in Mecca" he said