Ekiti Frontiers are sons and daughters of Ekiti committed to socio-economic development of the state.
Ekiti Frontiers have received the information about the plans of Governor Ayodele Fayose to build a new Governor’s Office and Court premises, for 1.9 billion naira, with utter dismay. 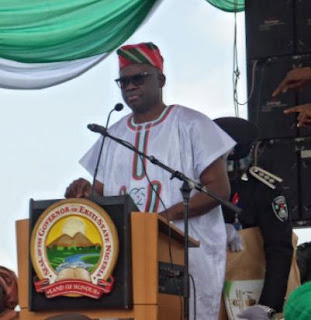 We observe that the former Governor of Ekiti, Dr Kayode Fayemi borrowed huge sums of money to build a new Governor's House, which incorporates a Governor’s office. The former Governor also budgeted for the court project and went as far as clearing the project site.  Dr Fayemi was criticised by well-meaning stakeholders, who considered that a new Governor’s House was ill-timed, bogus and imprudent by incurring debt that would be paid by future generations.

In the face of current biting recession and shortage of funds, it would have been more prudent to divert available resources to more economically viable projects for development purposes across the state.

We fear that this is a mindless plan to wickedly hide under capital project execution to misapply Ekiti scarce resources for projects that add no value to the economic well-being and survival of our state but only an avenue for the governor to please his whims and caprices. Other states of the federation are embarking on health insurance schemes to provide health care for their citizens and Ekiti State should spend her scarce resources on economically viable projects that improve the standard of living of her citizens.

We hereby express dismay over the propriety of engaging in valueless and needless projects such as a Flyover and a new Governor's Office in a state that desperately needs money to provide services for economic regenerating activities that can assist the state overcome its economic challenges already compounded by recession.

A more prudent Governor would have considered spending surplus money on agricultural production and commercial farming, building health institutions to deliver better health care to help Ekiti people engage in productive activities that can provide jobs and other social needs for better conditions of living.  Our teeming youths need assistance to engage in commercial farming. Our health care practitioners need facilities to provide accessible and affordable health care for all Ekiti people. A Governor’s Office and a court project are the least of the concerns of Ekiti people at this critical point in our nation building.

Ekiti people will no longer watch in disbelief, resignation and awe as their governor takes them on non-productive, self-serving adventures that profit him alone to the disadvantage of the generality of Ekiti people who desperately need money to provide activities to regenerate the economy of the state.

We at Ekiti Frontiers will henceforth engage the government in robust debate on his policies and programmes.  We hope our Governor will listen to rational, intellectual and good counsel.