June 07, 2018
President Muhammadu Buhari yesterday directed that the nation’s Democracy Day will, going forward, hold on June 12 of every year as against the current arrangement where the ceremony holds on May 29.
Buhari also resolved to honour the winner of the annulled June 12, 1993 presidential election, Chief Moshood Abiola, with the highest national honour, the Grand Commander of the Federal Republic. 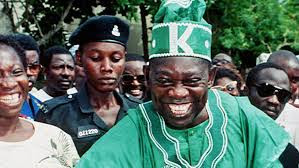 Late Chief MKO Abiola
The President disclosed these in a statement he personally signed and made available to journalists. He said he reached the decisions after due consultations.
Apart from Abiola, Buhari said he would also honour his running mate, Alhaji Babagana Kingibe, and the late human rights activist, Chief Gani Fawehinmi, with the second highest national honour, the Grand Commander of the Niger.
He said their investiture would take place on June 12.
The statement read, “For the past 18 years, Nigerians have been celebrating May 29, as Democracy Day. That was the date when, for the second time in our history, an elected civilian administration took over from a military government. The first time this happened was on October 21, 1979.
“But in the view of Nigerians, as shared by this administration, June 12, 1993 was far more symbolic of democracy in the Nigerian context than May 29 or even the October 1.
“June 12, 1993 was the day when Nigerians in millions expressed their democratic will in what was undisputedly the freest, fairest and most peaceful election since our independence.
“The fact that the outcome of that election was not upheld by the then military government does not distract from the democratic credentials of that process.
“Accordingly, after due consultations, the Federal, Government has decided that henceforth, June 12 will be celebrated as Democracy Day.
“Therefore, the government has decided to award posthumously the highest honour of the land, GCFR, to the late Chief MKO Abiola, the presumed winner of the June 12, 1993 cancelled elections.
“His running mate as Vice President, Ambassador Babagana Kingibe, is also to be invested with a GCON.
“Furthermore, the tireless fighter for human rights and the actualisation of the June 12 elections and indeed for democracy in general, the late Chief Gani Fawehinmi, SAN, is to be awarded the GCON.
“The investiture will take place on Tuesday, June 12, 2018, a date which in future years will replace May 29 as a National Public Holiday in celebration of Nigeria’s Democracy Day.”
The late Abiola died in detention while struggling to actualise his mandate as contained in the annulled election.
The Peoples Democratic Party, however, said the national honour to be conferred on Abiola by Buhari smacked of hypocrisy and political desperation ahead of the 2019 presidential election.
PDP said that President Buhari’s action merely sought to use the name and person of Abiola to gain a political capital and was not out of genuine reverence and recognition for him.
In a statement issued in Abuja on Wednesday and signed by its National Publicity Secretary, Mr. Kola Ologbondiyan, the party recalled that President Buhari, who was serving in the military administration of General Sani Abacha during the travails of Abiola, did not associate either by words or actions with the late winner of June 12 election.
Ologbondiyan further stated that history did not record President Buhari as sympathetic to the Abiola’s family when his wife, Kudirat, was gruesomely murdered by the agents of a government which President Buhari served.
He said, “It is, therefore, a sign of political desperation for President Buhari to seek to use Chief Abiola’s name as a tool to sway Nigerians in less than  12 months to an election where he (President Buhari) is seeking a second term.
“It is also shocking that the respectable grave of Abiola can be dishonoured by granting a posthumous award on him along with someone who denounced the June 12 mandate and preferred the company of his (Abiola’s) traducers.
“Even those who now masquerade as change agents were opposed to the naming of the University of Lagos after Chief Abiola.
“If President Buhari genuinely wants to honour Chief Abiola,  he should do so by ending all anti-democratic proclivities of his administration and allow for the rule of law and respect for our constitution.”
“The PDP, therefore, urges President Buhari to shed his desperate actions in his quest to win the 2019 presidential election as Nigerians can no longer be deceived by such antics.”